From MadaCamp
(Redirected from Pangalanes Canal)
Jump to: navigation, search

The Pangalanes is a chain of sweet water lakes and lagoons parallel to the coast of the Indian Ocean, separated by a narrow stretch of land. The lakes are connected by a man-made channel system that forms an inland waterway from Tamatave through to Farafangana, making it the longest canal in the world covering a distance of 600km. 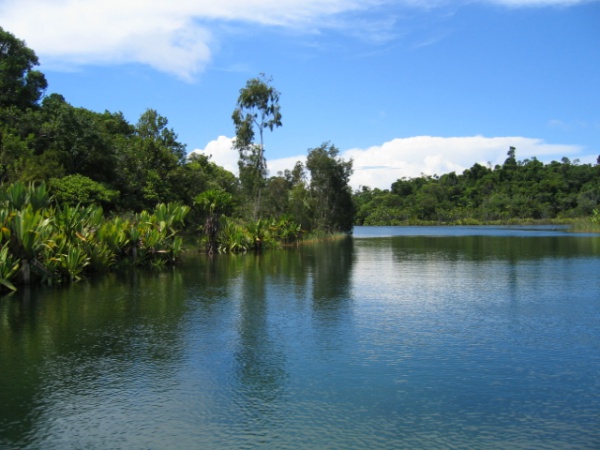 The canal was constructed under the governance of General Joseph Gallieni during the early French colonial years of 1896-1904. It was designed to facilitate transportation of goods to the main trading port of Tamatave, because shipping on the Indian Ocean was too dangerous.

The canal still dominates daily life in this region as it provides the main source of trade, transport and travel. Cruising by boat on the calm waters of Pangalanes is a fascinating journey through time and history. Many traditional Betsimisaraka villages can be seen along the banks, as well as pirogues, local fishermen, rafts with straw huts carrying timber en-route Tamatave, as it has been done since early colonial times. Over-croweded ferries have funny names such as "Great Hopes" and "Malagasy Fish". Villagers wave and shout at the passing boats and fishermen yell from the other bank asking you if you spent a good night!

Along the many islets and waterbanks there are plenty of Mangroves and other aquatic vegetation such as Typhonodorum, Carex, Cyperus, Pandanus, Fimbristylis, Melaleuca and Scirpus, and to a lesser extent Nymphaea and Najas water-lilies. There are also Casuarina, Cocos, Eucalyptus, Raphia and Musa plantations.