The route between Diégo-Suarez and Ambanja is suitable for biking throughout the year, even while the road is in a poor condition as it often is during the rainy season between December and April, but that's also when the landscapes are the greenest and most beautiful.

Start early, ideally around 6am to avoid the many passing cars and trucks between industrial facilities along the stretch from Diego Suarez to Arrachart Airport. Thereafter, the traffic along the RN6 gradually becomes less frequent and it gets better; on long stretches between the bigger cities traffic can be as infrequent as a single passing car only every ten or fifteen minutes.

Passing the French Mountain on the left, the route runs consistently but not steep uphill. After 60km, at the sign for Antsalaka and Park National d'Ambre, turn right and continue 6km to Antsalaka. From here, another 1.5km of mostly walking trail leads to accommodation at West Valley Lodge, a farm and tropical garden on which countless flowers, fruit and vegetables grow. 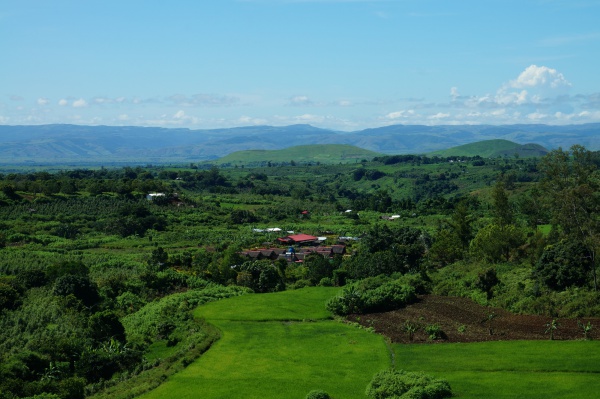 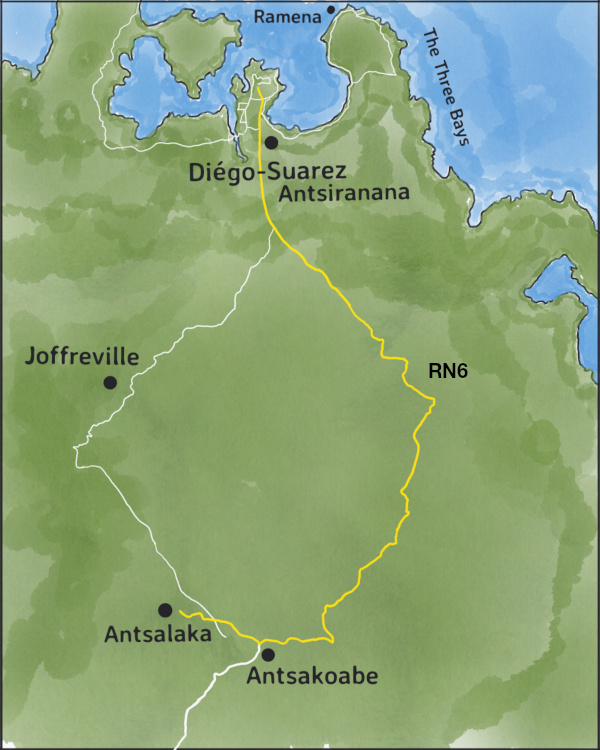 Again, an early start is recommended to avoid the heat for much of the ride which starts with an uphill stretch to Anivorano Nord. Beautiful scenery all along the way. 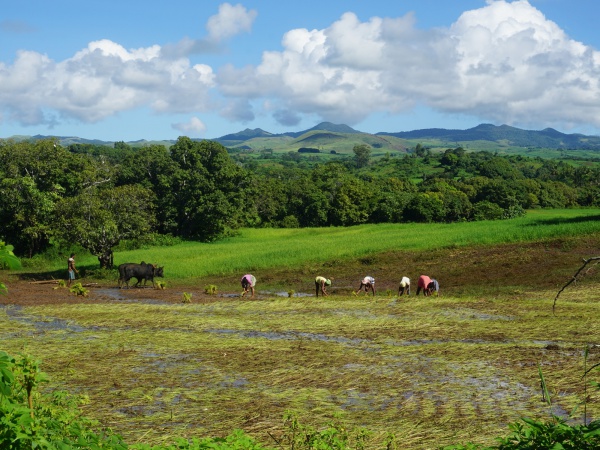 Among various villages, you will pass through the gem-trading village of Ambondromifehy. Stop here to buy a cut or uncut sapphire. 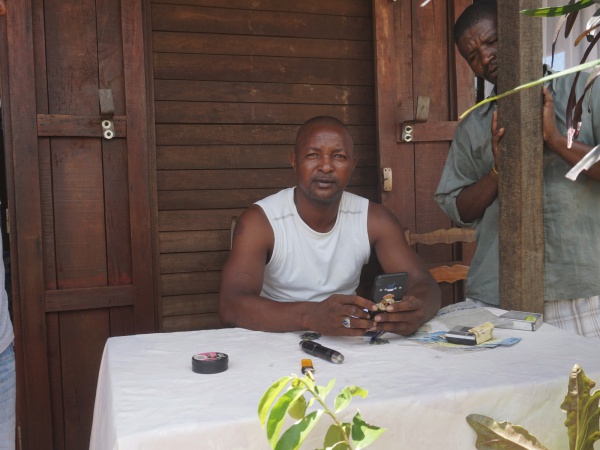 About one to two hours later you will pass the main entrance to Ankarana National Park and shortly thereafter a high point with great views in the direction of Ambilobe, the coast and the Tsaratanana Massif. Thereafter, a long and beautiful downhill stretch awaits you. 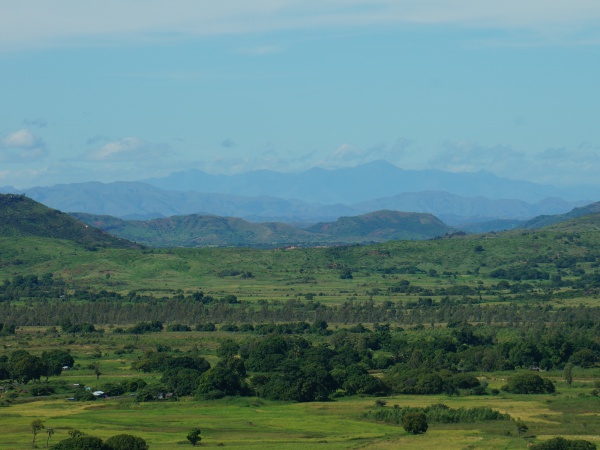 Unfortunately, there are no particularly good hotels directly in the centre of Ambilobe. The two best available options as of 2019 are Noor Hotel and Hotel National. Better accommodation can perhaps be found along the route just before or after the city. Who finds better accommodation options, please add them to this page. 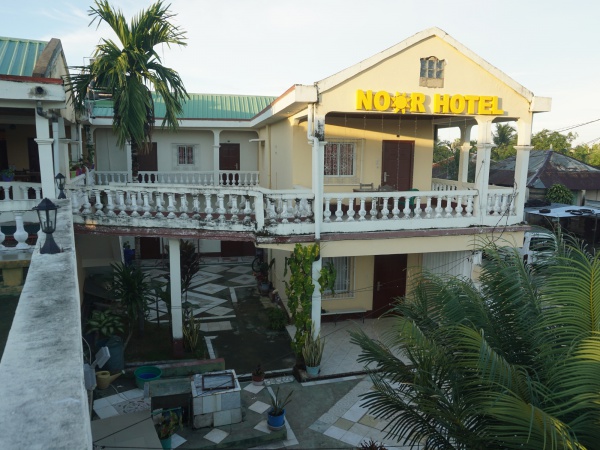 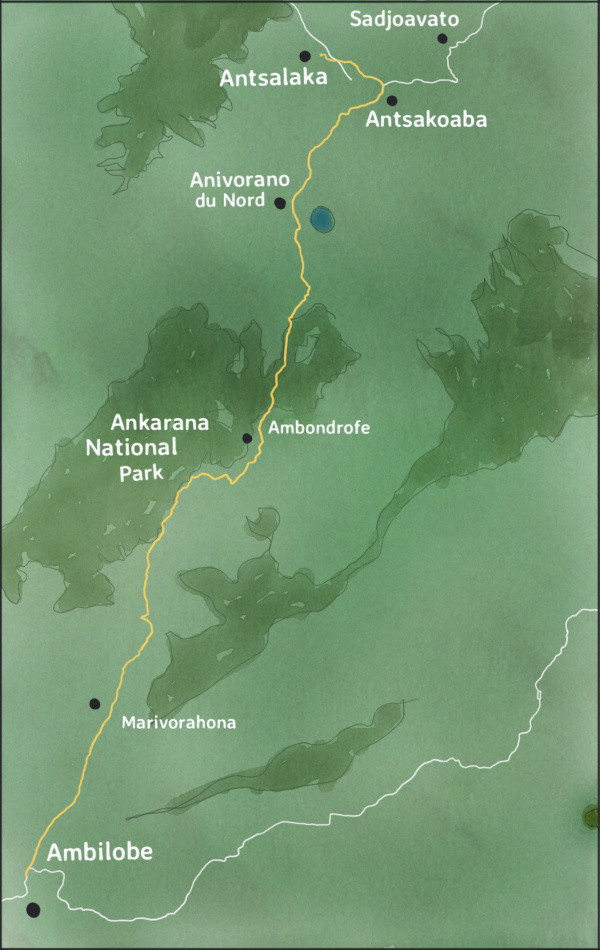 Especially today, an early start is recommended, since it's best to get out of the city before most traffic starts along the fairly long stretch out of the city and because 105km lay ahead, the longest distance of any day. 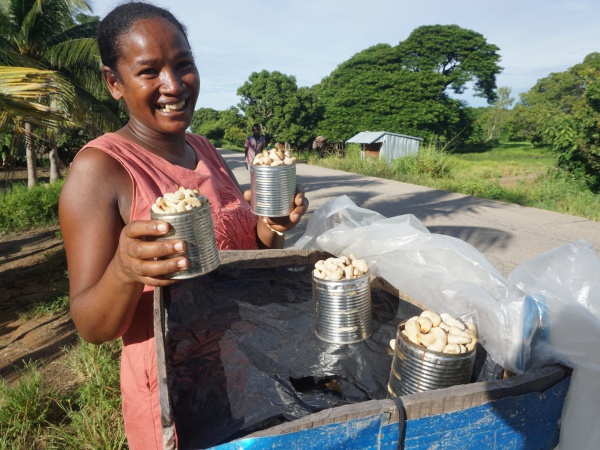 Ambilobe is an area of cashew farming. Shortly after leaving town, numerous farmers sell freshly roasted cashew at small stalls along the roadside. Each tin-can full of cashew cost 5,000 Ar (2019). The season of cashew is between May and September with early harvests usually available in some stalls already in the beginning of April.

A good lunch restaurant named Relax's Garden can be found at S 13°29.605' E048°39.358'. However, there are usually not many guests so there's not always something on the stove. If you want to be sure to have food prepared, call Mme Mariamo at 032 34 397 49 and place an advance order when leaving in the morning or in the evening before. Alternatively, a popular truck-stop where there's always something cooking can be found on the left side of the road a few kilometres further.

Before reaching the crossroad town of Madirofolo it's possible to take a shortcut by turning off the main road right onto a zebu cart road at 13°37'32.5"S 48°28'15.5"E to avoid much of the traffic along the final stretch into Ambanja. The route runs through cacao plantations parallel to the main road. However, at times of frequent rainfall, this route gets muddy and becomes partly or mostly impossible to bike. Then just continue the main road a bit further and turn left at Madirofolo.

There are several hotel options in Ambanja and the best as of 2019 must be Palma Nova, which offers accommodation for all budgets from a dorm to doubles with en suite bathroom and a nice informal bar and restaurant. It's easy to get lazy here while exploring the area. 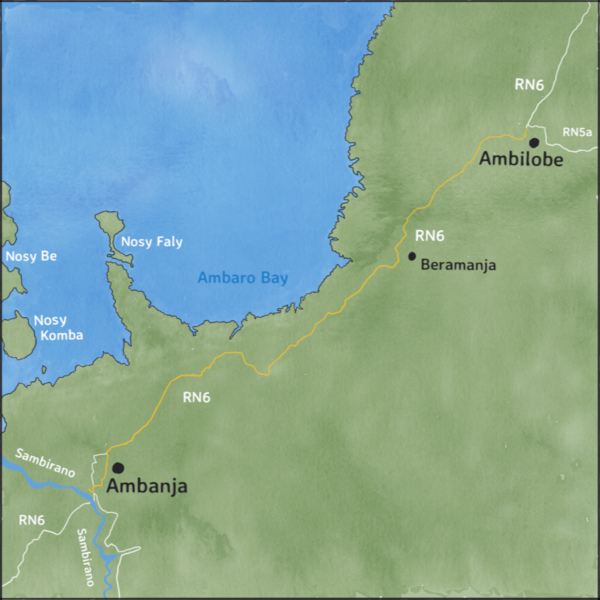 To complete a coast-to-coast bike trip, continue onto Ankify and from there for another few kilometres to Ankify-Doany, a small fishing village with a nice beach and view onto Nosy Komba. The 42km back and forth should be easy in comparison to the previous days. 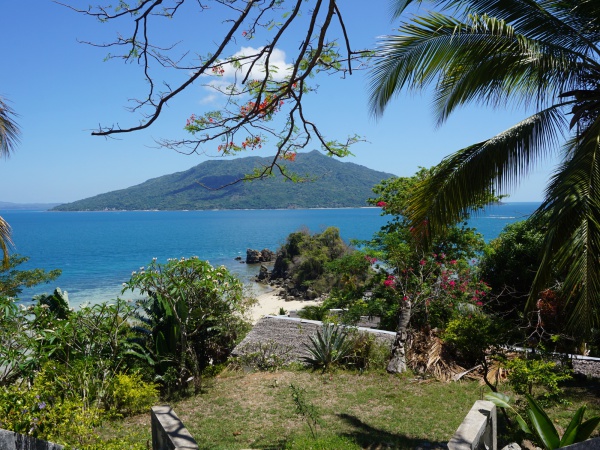 From Palma Nova to Ankify, part of the route through the cacao plantation is the most beautiful but which can get a bit tricky here and there during rainy periods. At other times, the many criss-crossing trails are perfect for biking. 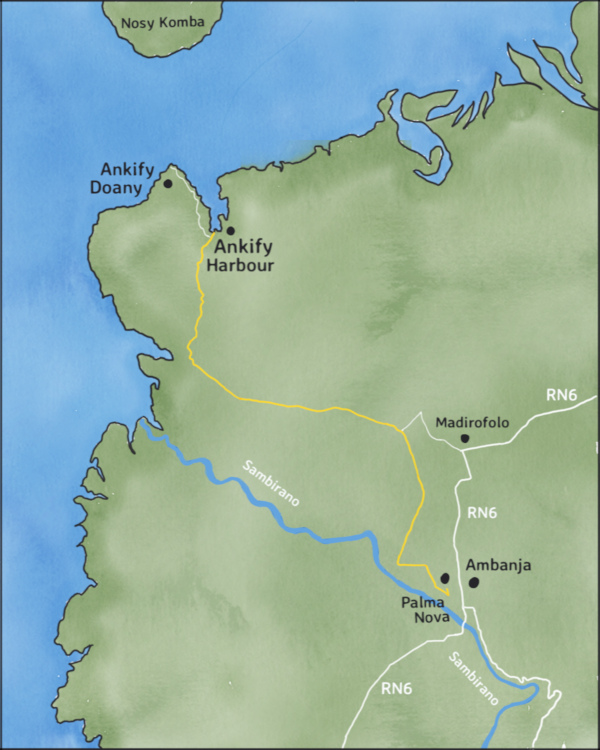 For those who haven't explored Sambirano, between one and three day's bike ride along the river is recommended.

No need to describe the return journey, as it's the same way back, just with some different stops along the route.

People often complain about the road conditions in Madagascar. While this is true if going by car, it's a lot easier to circumvent the potholes by bike than by car. 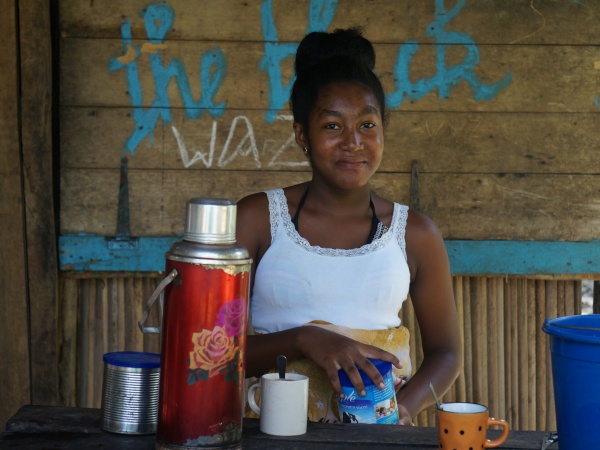 Another Thé-cola stop at S 13°31.266' E048°41.080'. For those who don’t like Thé-cola, coffee or tea is served along the road in equal quantities. The coffee is usually a local mild robusta while the tee is always a herbal tea boiled with the dried leaves from a bush named Ravimbafotsy. 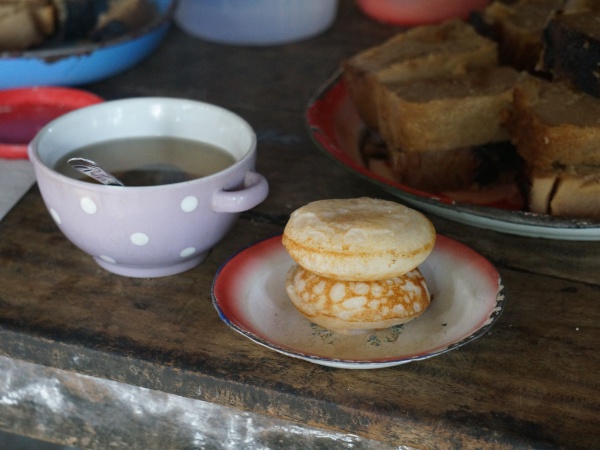 Time for a night and day's rest at West Valley Lodge.

Starting the day with another Mokary vary gasy breakfast at the RN6 crossing after leaving Antsalaka.

Arrived in Diégo-Suarez in time for an afternoon coffee at La Rosticceria on rue Colbert followed by a picture show of the past days for the team at Hotel Kartiffa in the evening.