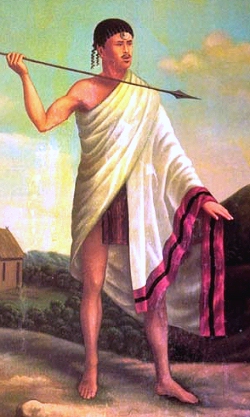 Portrait of Andrianampoinimerina painted around 1905 by Ramanankirahina

Andrianampoinimerina (The Prince in the Heart of Imerina), short for Andrianampoinimerinandriantsimitoviaminandriampanjaka (The beloved Prince of Imerina who surpasses the reigning Prince), was king of the Merina Kingdom in Madagascar in the 18th century and is considered one of the greatest political rulers and military strategists of all times.

Andrianampoinimerina was born in 1745 in Ikaloy in the kingdom of Ambohimanga. He was the son of Andriamiaramanjaka (King of Ikaloy) and Ranavalonanandriambelomasina (Princess of Ambohimanga). At 1787 he became king of the small Ambohimanga kingdom. In 1794 he conquered the neighbouring kingdom of Antananarivo and moved his headquarters to Antananarivo. After uniting the various Merina kingdoms from the central plateau of Madagascar, he also conquered other highland tribes, such as the Betsileo, Sihanaka, Bezanozano and Bara territories. By 1810, the time of his death, Andrianampoinimerina had conquered two thirds of Madagascar. The Merina Kingdom was the most powerful empire in the history of Madagascar.

He is widely recognised as one of the three greatest Merinas to have ruled Madagascar before the French occupation, along with his son Radama I and the Prime Minister Rainilaiarivony. Andrianampoinimerina issued many laws, such as land reforms and trade regulations. Each person was given enough land for rice production to support their families, the leftovers was paid as a rice tribute to the king. Community projects, such as building canals, were imposed through forced labor with bonuses for the most productive workers. He standardised the usage of weight scales and all units for volume and length measurements at the markets. Additionally, the use of money was standardised and regularised. Andrianampoinimerina also organised the military force by creating a citizen army called Foloalindahy - the 100,000 soldiers and forbid the burning of forests.

Andrianampoinimerina had several wives and at least 30 children. His successor was his son Radama I, who with the help of Britain conquered most of the remaining land of Madagascar.