The Royal Hill of Ambohimanga, meaning blue hill, is located about 24km northeast of Antananarivo. The location is where the line of kings and queens that once united Madagascar came from and where the subsequent royals spent much of their recreational time.

Ambohimanga is one of the twelve sacred hills of the Imerina and a place of worship by many Malagasy pilgrims today. A sacraficial stone in front of the rova is used during certain holidays to slaughter chicken. The walled historical village contains burial sites of members of former Royal Imerina families from 19th century. 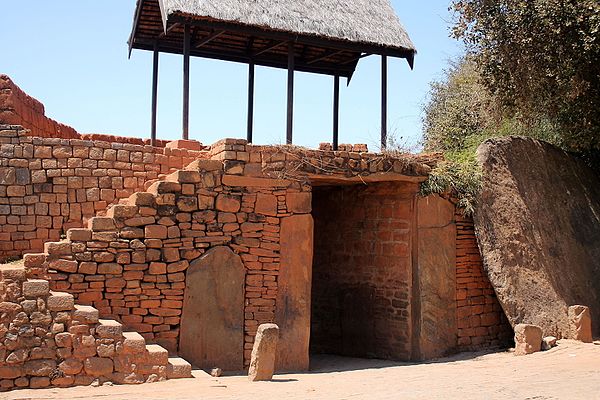 The location was declared a UNESCO World Heritage Site in 2001 and includes seven gates, although some are mostly overgrown by bushes. The site is open Tuesday through Sunday from 9am until 11am and from 2pm until 5pm. Closed Mondays. Entrance is about 7,000 Ariary.

Ambohimanga is without doubt the most famous of all the hills. From there, towards the end of the 18th century, the King Andrianampoinimerina launched his conquest of all the other hills.

An outdoors restaurant in a lush tropical garden offers a stunning view of Antananarivo in the distance. The restaurant is a bit hidden following a short trail from behind the souvenir shops near to the entrance to the rova. Live musical entertainement with traditional dancers entertains visitors.

A view of Antananarivo from the garden restaurant, next to the rova at the Royal Hill of Ambohimanga