Cinagra is a bean-to-bar chocolate factory producing a range of pralines and chocolate bars using single-origin cocoa grown in the Sambirano region in northwest Madagascar. Cinagra's fine chocolates are sold under brand names such as Tsar, Eben and Palissandre.

Since 2006 Cinagra produces chocolate in a factory located on the outskirts of Antananarivo, approximately 15 kilometres from the city centre. About 20 employees work in the factory, where its production facilities meet HACCP standards. All processed cocoa beans originate from organic cocoa plantations in northwest Madagascar.

Cinagra differentiates between superior cocoa beans used for export and standard cocoa beans used for the local market. All cocoa beans undergo a quality check at the factory. Thereafter the cocoa beans are roasted between 50 and 100 minutes to bring out the chocolate flavour and colour. After immediate cooling, the beans are cracked, separating the hard outer shell from the cocoa nib. At the same time, the nibs are sorted by size and thereafter crushed in a grinding machine. The crushed nibs are mixed with other ingredients, such as cocoa butter, soya lecithin, sugar, milk powder and vanilla. This chocolate mixture undergoes the process of kneading and agitating in a conching machine for 72 hours non-stop at a temperature of around 50°C. When finished, the chocolate mixture is stored at 44°C until further processing. Depending on the final type of chocolate, a tempering machine adjusts the chocolate mixture to the necessary temperature (29°C for milk chocolate and 31°C for dark chocolate) which allows it to crystallise. The chocolate is now ready to be filled into bar forms or various theme forms. A cooling tunnel chills the chocolate slowly down to 4°C at the end of the process. The individual wrapping of the chocolate is done by hand.

Besides the various chocolate bars and cooking chocolate sold in supermarkets and shops throughout the country, Cinagra also supplies confectioneries, such as Chocolaterie Colbert, with bulk chocolate. The dark chocolate bars named Eben and Tsar contain between 55% and 100% cocoa, while their milk chocolate bars such as Palissandre vary between 38% and 44% in cocoa. One of their latest products is Tsar with 72% cocoa, flavoured with cocoa nibs and Fleur de Sel (sea salt). 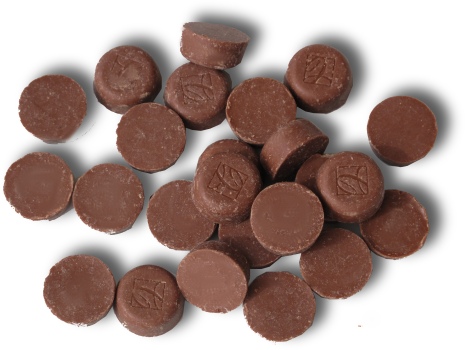 Cinagra currently exports their products to France, Mauritius, South Africa and USA. in 2011 Cinagra launched the Menakao brand with seven different bars ranging from 63% to 100% cocoa. The Menakao range is produced for export only and sold in Europe and elsewhere. Additionally, Cinagra manufactures and packages chocolate on behalf of Madécasse, a US company selling chocolate as well as other products of Malagasy origin such as vanilla in the US and other countries.