Georges Andrianonison is a Malagasy gemcutter in the second generation located in Antananarivo. Born and grown up in Antsirabe, he learned the skills of gem cutting from his father. At the age of 25 Georges started cutting gems professionally. Today, with more than 25 years of experience, he is one of the best Malagasy gemcutters in Madagascar. 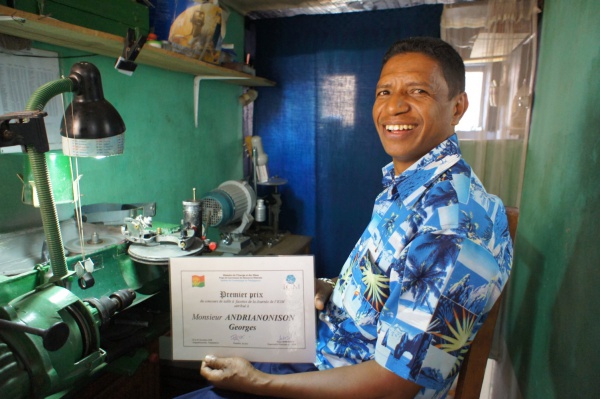 In 1987 Georges opened his own workshop and showroom in Tulear, south of Madagascar. With the launch of the Institute of Gemology of Madagascar (IGM) in 2003, he took a 3-month course and deepened his already broad knowledge of gems and minerals. In 2008 Georges won the first price for the best cut stone out of 200 participants.

Georges cuts all gems according to the needs and wishes of his customers. He cuts facets following international standards. A facet is composed of many small, three or four-cornered, smooth polished surfaces, allowing the gem to reflect light. Since 2009, he is specialised in concave cutting, a new cutting method which only five cutters in the entire Madagascar are capable of. Concave cuts have three times as much light reflections as single, flat facet cuts. Besides that, Georges creates theme carved stone facets, such as star signs. He works with an armpiece on two machines, one of which he designed himself.

Due to difficult business opportunities in Tulear, Georges moved into the small house of his son in Tana in 2010. He is currently working on setting up his own workshop including a boutique. In the future Georges wants to cut stones on demand and sell them directly in his shop, maybe even export them. Additionally, customers interested in high quality rough stones can use his services in identifying and purchasing these small treasures and having them custom cut into finished gem stones during their stay in Madagascar.

For enquiries Georges can be contacted via phone or email: