Marojejy National Park is located in the SAVA region in the northeast of Madagascar. Geographically the park lays between the Androranga river valley to the north and the Lokoho river to the south, the Andapa basin to the west and coastal plains and foothills to the east. Marojejy National Park is characterised by its impressive massif, its primary forest that covers almost the entire site and its great richness in biodiversity and endemic species.

The predominant climate of Marojejy is tropical humid with an average annual rainfall of 1,936mm, with the maximum between November and June. The altitude plays an important role in the variation of the climate. The rainfall is higher in altitude and more irregular and less in the north and northwest. In the lowland the average temperatures are about 22.3°C in July and 26.9°C in February, while on the Marojejy peaks they can drop to 1.5°C in the winter months.

Two types of soil in Marojejy: Ferralitic soils at lower elevations and sandy peat soils beyond 1,800m. The park is dominated by a granite massif characterised by very rugged forest reliefs. It has a complex shape comprising a succession of parallel or divergent ridges from many sharp peaks with steep and irregular slopes.

The Marojejy National Park with its heavy rainfalls has a very branched and deeply embedded river system. This corresponds to powerful mountain stream characteristics with very steep gradients and a predominance of large boulders in the river beds. This river system consists of several rivers having their source in the park, of which the eight most important are: Andranomadio, Andranomifototra, Manantenina, Sambava, Soahitra, Andrahanjo, Andalangy and Antsaberaoka.

The dominant ethnic group in the area is Tsimihety.

65km from Sambava along the tarred RN3B, the Marojejy National Park office can be found 200m before Manantenina. From thereon a 2.7km secondary road leads to the village of Mandena. From Mandena it is a 2.9km walk along a trail to the park entrance.

The approximate travel time by car from Antananarivo to the park is about three days. The first stretch goes along the RN4, thereafter along the RN6 (poorer condition) until Ambilobe, where the road splits direction Vohemar. This road is not passable during the rainy season from December to April! On Tuesday, Thursday and Saturday a taxi-brousse leaves from Antananarivo (station Andranobevava and Anosibe Angarangarana) direction Andapa. A ticket costs 80,000 Ariary (2015). Alternatively, Air Madagascar and Madagasikara Airways offer regular scheduled flights to Sambava.

Before the independence of Madagascar, the Marojejy Massif had already attracted attention of the French colonial administration. On 3rd January 1952, Marojejy was classified a Natural Reserve. This status was changed to National Park on 19th May 1998. In 2007, Marojejy National Park was declared a UNESCO World Heritage Site.

The management of the reserve has undergone successive phases:

Marojejy National Park plays a strategic role in the national network managed by Madagascar National Parks. Indeed, it is a gene pool for the network:

The park also plays an economic role in the region:

The conservation targets of Marojejy National Park are:

Furthermore, this type of vegetation is unique as it is only found intact in Marojejy over 1,800m, despite its existence in Tsaratanana and Andringitra.

The site and local population

Unfortunately, the villagers only seek to satisfy their immediate needs even at the risk of compromising the future of these natural resources. Thus the Marojejy National Park is subjected to pressures including:

The best fauna most visible to tourists

The Marojejy National Park is home to many species of mammals, amongst them are:

11 species of lemurs were identified in the park:

In 2010, an inventory of Marojejy National Park's birdlife counted 118 species of birds. An overview of some of these species:

The Helmet vanga is endemic to Madagascar and can be found in the northeast and central east.

An overview of identified amphibians of Marojejy:

An overview of identified reptiles of Marojejy:

The best flora most visible to tourists

On the floristic level,

The vegetation of Marojejy National Park consists mainly of a dense humid forest, which covers 92% of the park's surface area. Low-lying forests are present and account for nearly 34% of the massif. At altitudes lower than 800m, the height of the canopy reaches 25m to 30m and goes down to 2m to 4m higher up the montane region.

Madagascar National Parks has a central office in Andapa, where you can inform yourself about the Marojejy National Park.

Furthermore, a local office of the park is located in Manantenina where you will find all the information to organise your stay, in particular about the circuits (tours), guides and possible accommodations.

In Manantenina you will also pay the admission fee for visiting the park, which depends on how many days will be spent in the park. Foreign adult tourists pay 45,000 Ariary and foreign children 25,000 Ariary for 1 day (price 2015). Guides are obligatory. The fee for a guide depends on the chosen tour (circuit). 12 French and English speaking guides are at your disposal. They all received training on guidance techniques, interpretation of biodiversity and in first aid. For the various tours, there are also porters available. 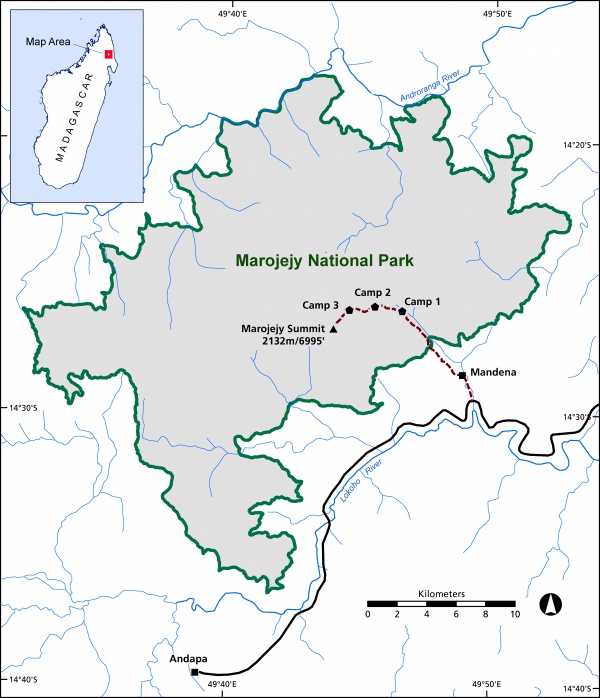 Medium circuit, 4.3km, 2 - 3 hours trek from the park entrance to Camp Mantella. Circuit in the forest along a maintained stone path with an elevation from 250m to 450m. Steep slope.

What to see?
Discover the lowland primary forests. You will have the opportunity to encounter reptiles and amphibians (such as the frog Mantella laevigata, tree frogs and Madagascar tree boa), species of lemurs (such as bamboo lemur, White-fronted brown lemur) and species of birds (such as the Blue coua and Helmet vanga).

Along the circuit you take a break at a natural swimming pool with a waterfall. A 30-minute walk from Camp Mantella takes you to the beautiful Humbert waterfall (Cascade de Humbert), named in honour of professor Humbert - a respected botanist of the National Museum of Natural Historiy in Paris who discovered Marojejy in 1948.

Camp Mantella
The camp is located at an altitude of 450m and offers six bungalows equipped with bunk beds, mattresses, pillows and linen. At the camp there is also a sheltered eating area with fireplaces and cooking utensils.

What to see?
This circuit is ideal for day visitors who want to spend some hours in the forest including a picnic. The path takes you through lowland forest to a waterfall with a black pool where fish can not pass. The name of this pool is Tsiapiagna.

Throughout this trek you may spot birds such as the Blue coua and Helmet vanga and the White-fronted brown lemur.

Medium to difficult circuit, 2km, 1 to 2 hours trek from Camp Mantella to Camp Marojejya. Circuit along a maintained stone path with an elvation from 450m to 775m in altitude. Watch out for slippery stones.

What to see?
This circuit is the link between Camp Mantella and Camp Marojejya. Along the route, passing through lowland forest, you can find the terrestrial chameleon Brookesia Karchei and species of endemic palms, such as Marojejya insignis. You may also have the chance to spot the Silky sifaka with its shiny white fur. The Silky sifaka is endemit ot the park. The name of this circuit comes from the Malagasy name for this lemur species: "Simpona".

At Camp Marojejya you will have the opportunity to admire the border between the lowland forest and the high altitude forest. From the camp you have beautiful views of the granitic cliffs and mountains covered with the intense green of the forests.

Camp Marojejya
The camp has a sheltered eating area and 4 bungalows equipped with bedding and kitchen utensils.

Adventurous and sporty circuit, 4km, 6 to 7h hours trek from Camp Marojejya to the summit. 2.1km from Camp Marojejya there is an intermediate basecamp at 1250m altitude: Camp Simpona. Ascent from 775m to 2132m in altitude. This circuit is characterised by granite rocks. Throughout the circuit you will pass a slippery slope.

What to see?
The trek to the peak of the massif begins at Camp Marojejya. You will cross the rainforest at high altitude, maybe even walk through clouds, until reaching an open landscape of thicket from where you can overlook the whole region. From this particularly unique location you can gaze thousands of square kilometres and even see the Indian Ocean on a clear day.

In the mid-altitude forest about 1km from Camp Marojejya an old fossil of the famous Takhtajania perrieri was discovered, a plant dating back to the times of dinosaurs 120 million years ago.

Camp Simpona
Camp Simpona is located at an altitude of 1250m and is completely isolated in a wild nature. The camp has a sheltered eating area two well equipped bungalows.

Cultural highlights in the region

Tourist attractions in the region

Habits and customs in the region